Adventures in the DDD Zone

Adventures in the DDD Zone

Last Saturday,  fished the Forbidden Hole with some others. Caught a few fish but water and air temp never reached 50 degrees.  Didn’t want to whine and moan, but today was an altogether different day. What a difference a week makes. 20 degree change in water temp!

Too much iced tea at Catholic Lenten seafood dinner made for a restless night. Woke at 248 and finished loading up. My coffee stop got a new clerk and he wouldn’t let me in, scarypants. Went to a lesser alternative and when I got back in the truck with the luke-hot coffee,  tried to plug in my phone but left charger at home. Lovely.  Went back home and snuck in as to not wake my (hears a squirrel fart 3 blocks away) wife. Found charger then tripped over laundry basket and ran into wall on the way out. Yeah, I put the basket there. Stopped at Cash Magic Larose for bowel evaluation,  hot a$$ coffee and some ice. No bearded lady and otherwise very quiet and boring.

Launched at Bason’s around 530 and started pedaling west with a light breeze at my back. As is my custom, light on head, but off. Although the moon was full, the fog and overcast sky made it pretty dark.  Beautiful.  Spooked a couple big fish who made me jump further than them. First boat passed me around 6. He was pretty far from my path but I still put my 99,000 lumen headlight right on him, just for fun. Yes, 99,000 lumens,  that’s what the advertisement said!

Pulled up to a cut and got a couple hits on my first cast, topwater of course.  Air temp and water temp near 70. Little different from last weekend.  I put the anchor down and cast towards the opposite shore. Payow! Big hit and run upcurrent.  15″ trout,  nice start at 615. Couple more cast and a 17. Woohoo! Caught 2 or 3 more legal trout then dinks. Moved around back of the island,  nada. Went to the end, missed one on the point.  Went around to the windward side and it was on. Caught a few dinks but also some quality trout. Strange pattern.  Fish were 20 yards out and hit better if I cast up current.  I just kept fishing.  Anchor, catch a few, move, anchor,  catch a few more. Had a huge hit and the fish sped ahead of me across the flat like a train. 17″ trout.  With the warmer water, they frisky. I wasn’t keeping anything I had to measure and when the bite slowed in the area, I had kept 19. I saw another kayak on a nearby point so I pedaled over.  Caught 3 in open water on the way, but no size. I pulled up and it was Heart Faust.  She had caught a nice red and a bunch of trout.  I caught one in front of her as we discussed the bite falling off and laughed.

We were headed the same way so we fished together.  It was spotty, fish here, fish there, dinks mixed in with some nice trout. We were both changing baits regularly from topwater to Vuduencork to jighead and jerk baits. At about 11, the wind changed to the south and kicked into overdrive.  Heart landed an 18″ on a jighead, I believe.  She lit up like a christmas tree, and yes, I was jealous.  I watched her release it and yelled what are you doing? She wasn’t keeping fish! Lord. Well, she said her freezer was full. The wind had gotten to a point where boat control and fishing were difficult,  at best, so we started heading back in. The wind was on our right side, but we were pedaling against the current. Oh yes, fun city.  On the way back,  I watched her catch yet another 18″ trout.  Damn, girl! She had the size and I had the numbers. I gotta give it to her, she fished till the end. She had to have caught a couple limits and I’m sure I was well over 75. First kicka$$ topwater trip of the year. Awesome day!

I rolled down to the fabulous Galliano Inn to clean fish. Hard to beat the day I had except for being able to goad the boat guys with their pitiful catch. As usual,  they couldn’t believe I caught all those fish in a kayak. Ahhhhhhhh.

Couple side notes. My Diawa Tatula XT Bass/Fugo combo from B&B tackle is the bomb. Feather light and casts a mile. Awesome! I also modified a Coleman cooler I’ve been sitting on by adding 2 rod holders and insulating the lid. I needed more rod holders with the addition and have destroyed 4 soft coolers. Worked great on first trip.

DDD is coming! Are you ready? I can’t wait! 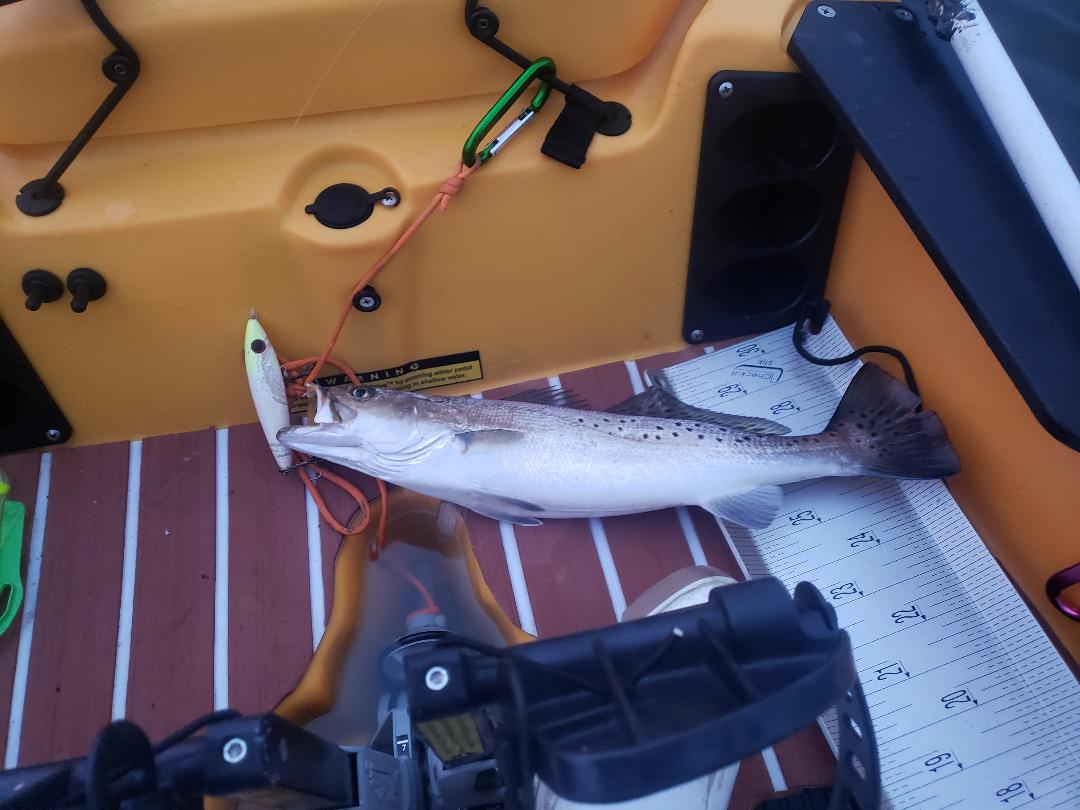 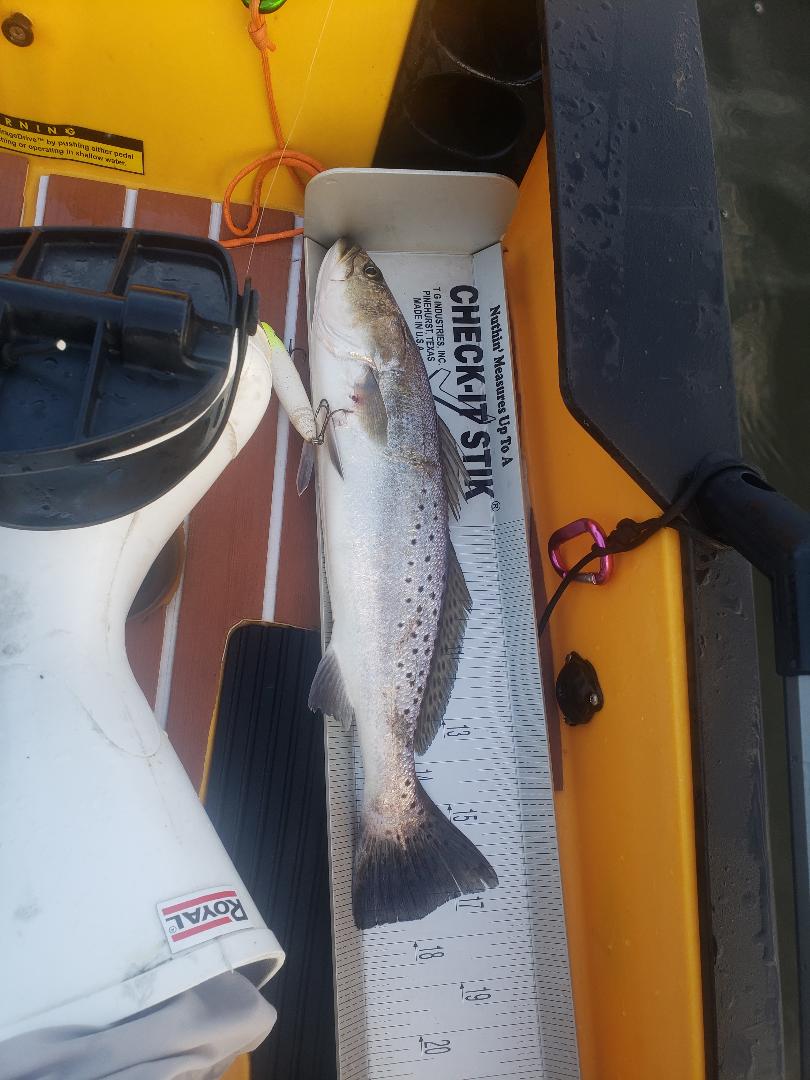 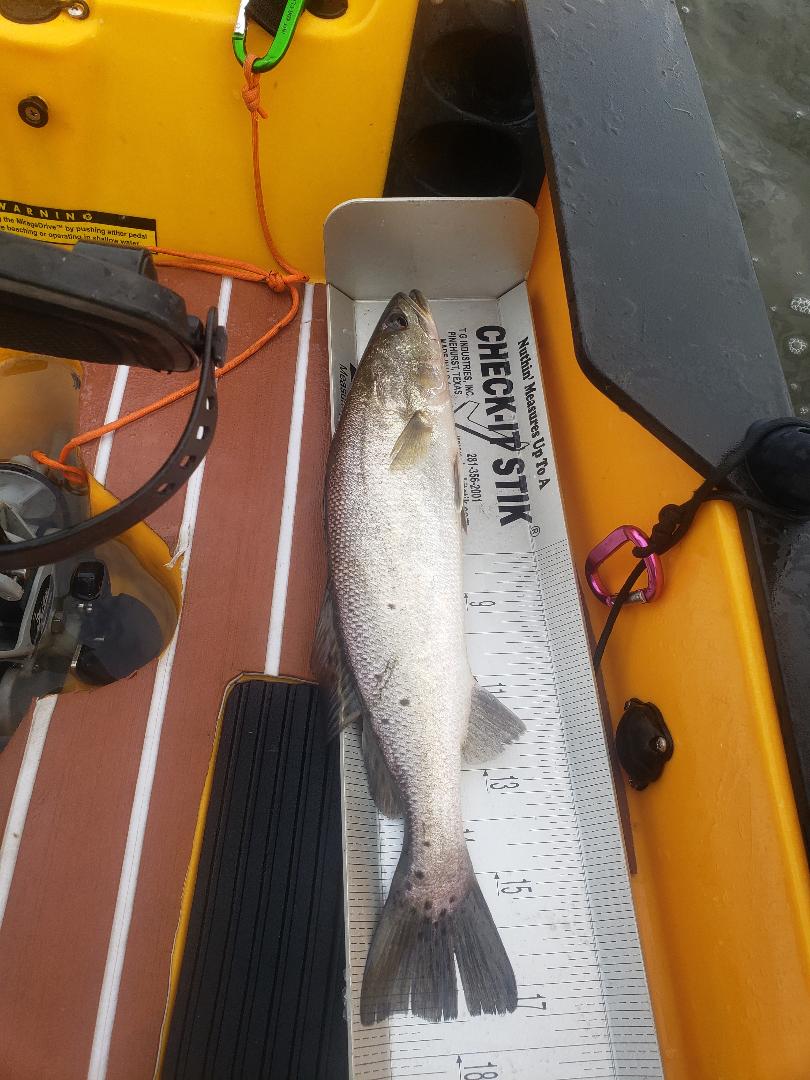 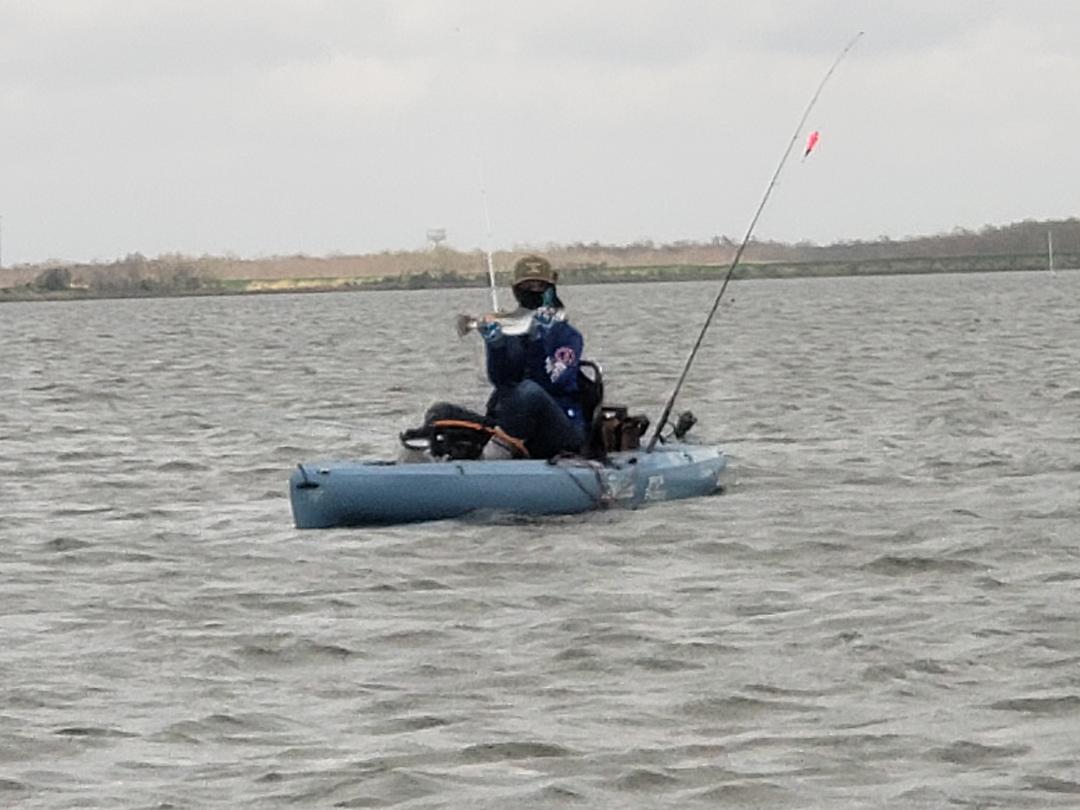 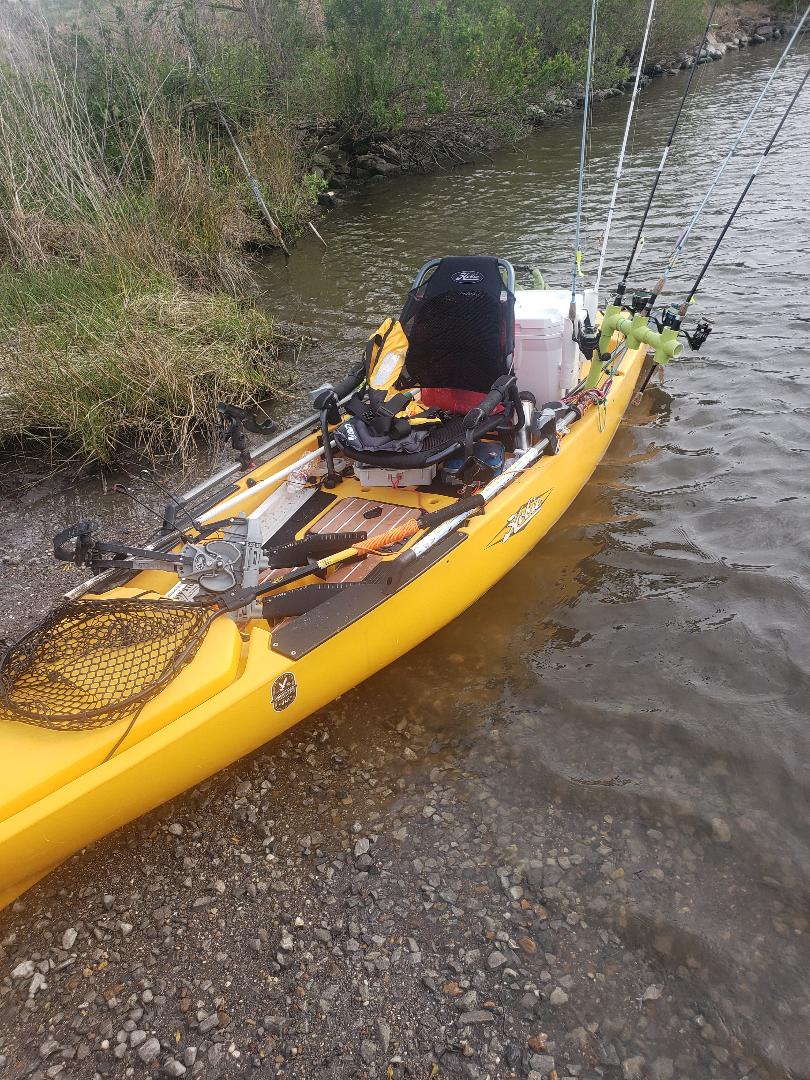 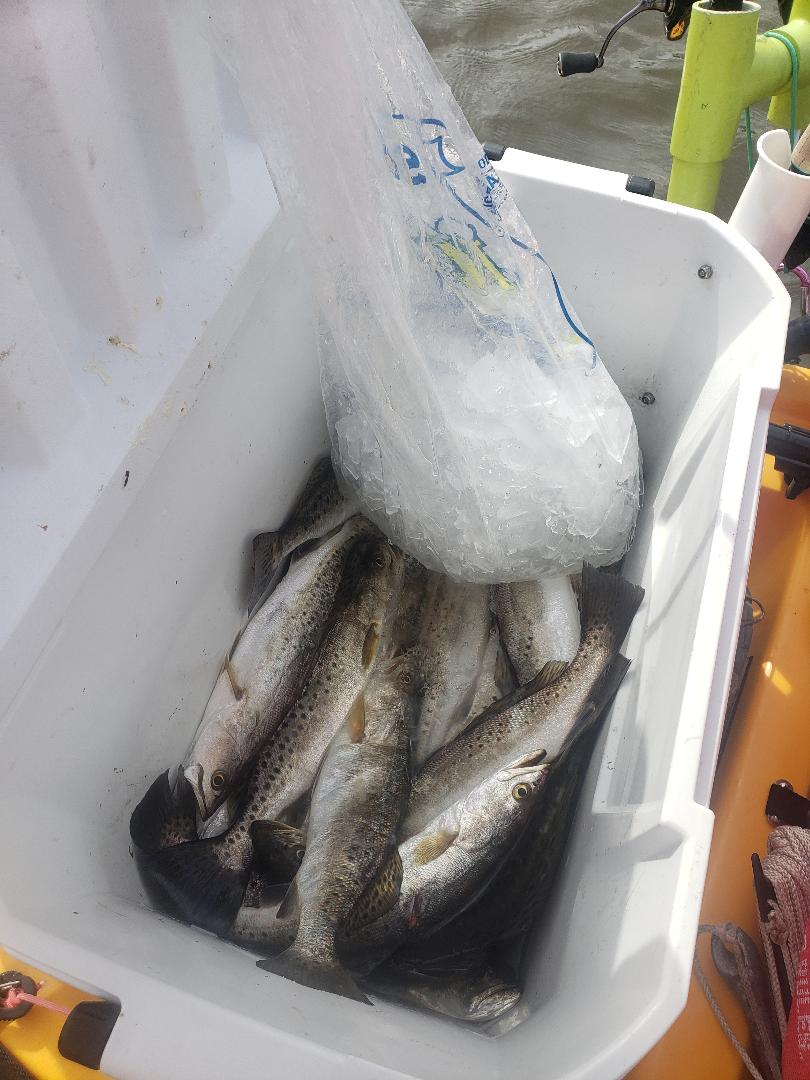 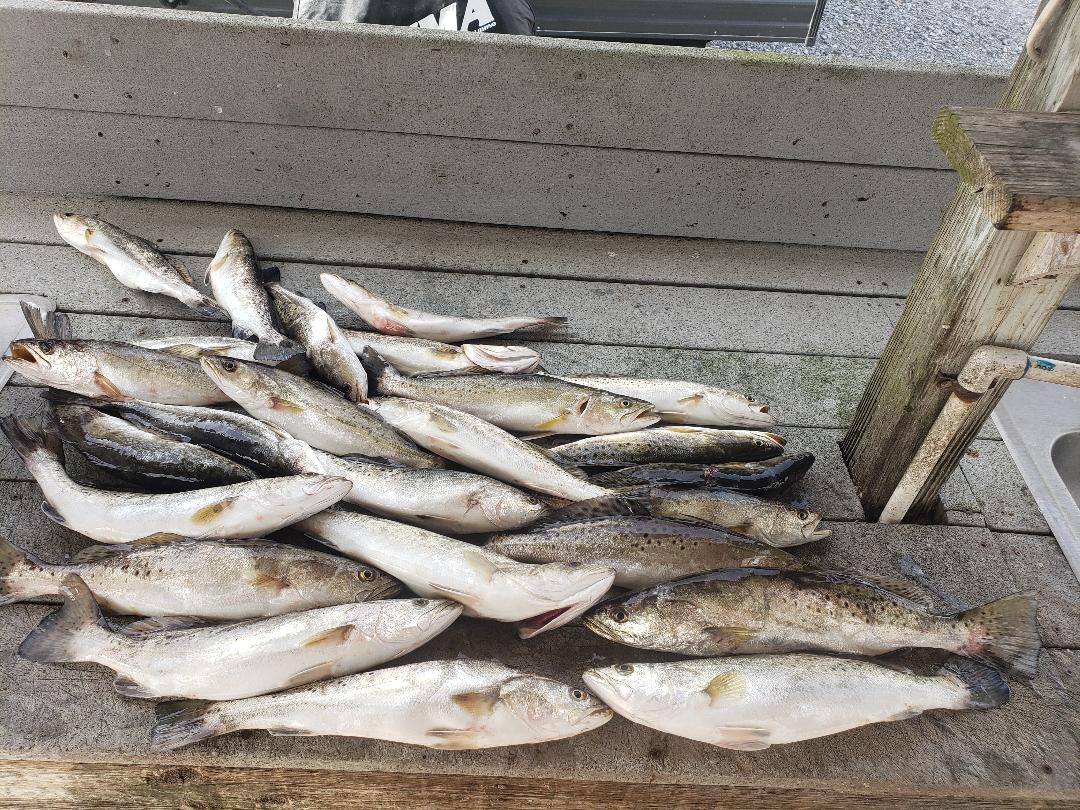